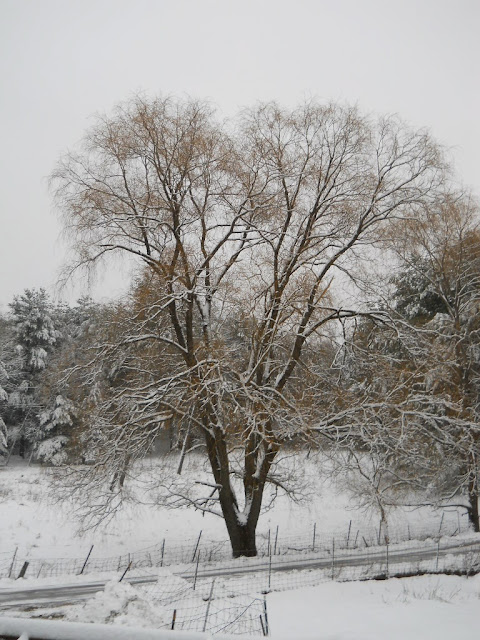 A few shots of winter in all its glory 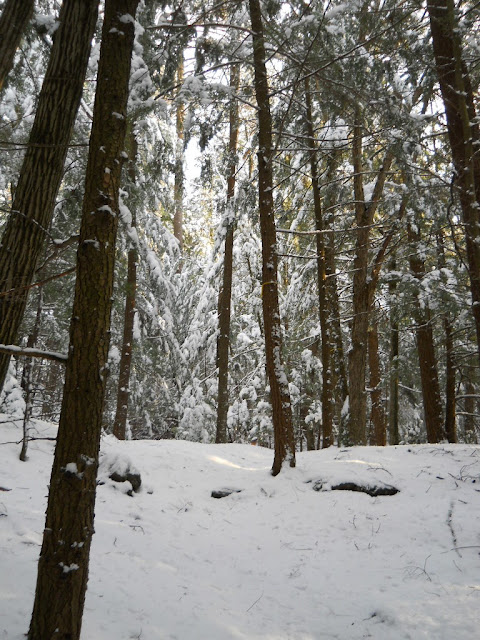 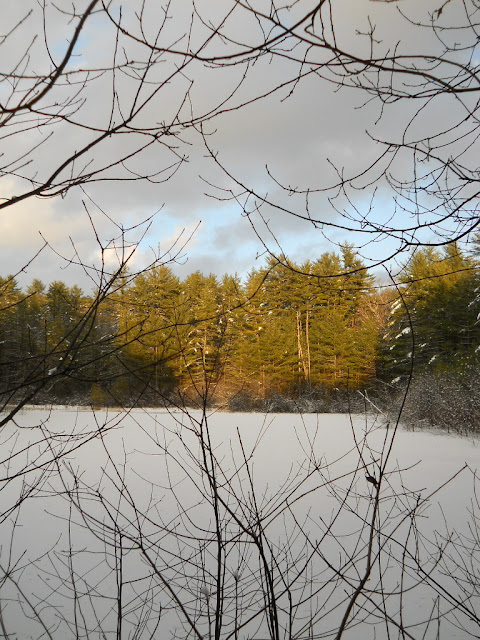 The beaver pond frozen over Ice in the seed heads of Queen Anne's Lace catches the light, glinting in the setting sun 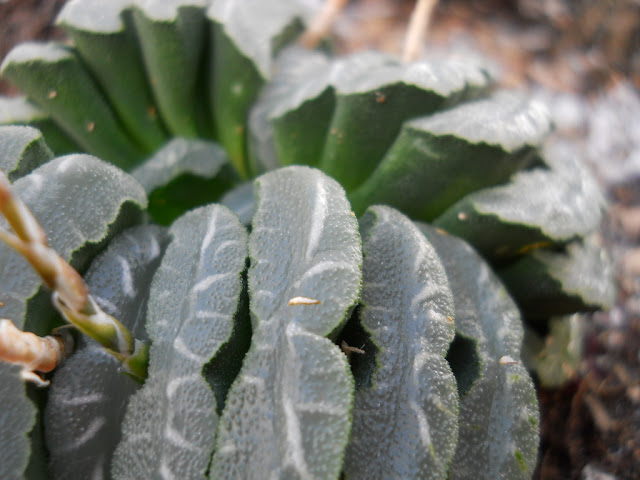 I recently visited the Smith College Botanical Greenhouses. The core greenhouses were built in 1895 which means that they are beautiful, old, and charming.   Built on brick foundations, ferns and mosses live in the cracks of the mortar and a there is a carpet of escaped plants as ground cover under the benches.  Some of the plants appear just as old, with gnarly trunks, their limbs and leaves working hard to escape through the glass roof.  I like going to these places because at every turn I encounter hundreds of plants I have never seen before. It is like walking through a plant encyclopedia. It the middle of winter is is nice to feel the warm, humid air and breathe in the rich scent of plants and earth.

Above: in the cactus house I found a nice collection of Haworthia, this one is H. truncata (meaning ending very abruptly). Vertical cleaved pieces, like rocks left from another age! 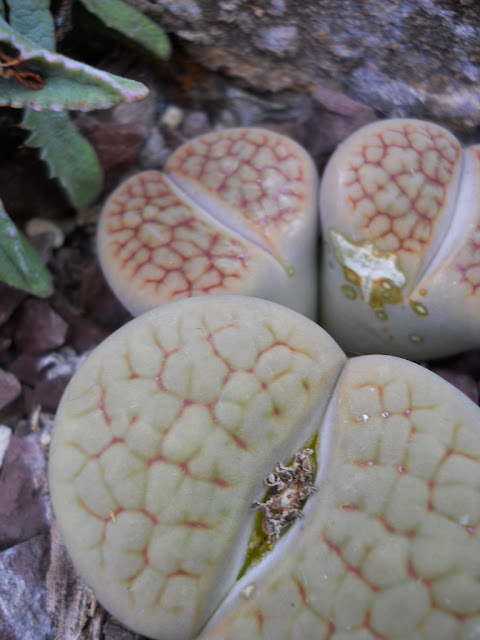 Lithops hookeri var. Lutea
The Lithops, or Living Stones, are marvelous creatures- it is hard to believe that they are plants and not rocks or sea creatures or strange amphibians. 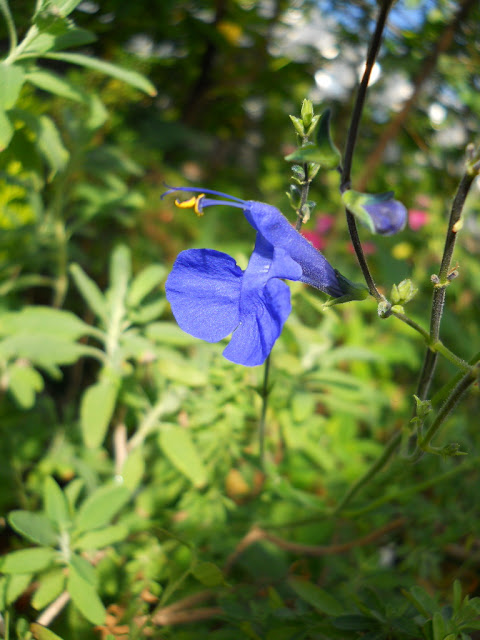 Salvia sagittata
Blue flowers are uncommon and highly revered. There are few flowers out there with such an intense, pure, and royal blue. This Arrow Leaf Sage (saggitatta, meaning arrow-shaped) had a few early blooms that stood out brightly against the lush greenery. This sage, native to Chile and Peru, grows at high altitudes (10,000 feet), but will survive well in zone 8-11 gardens, provided it is given full sun, great drainage, and fertile soil. 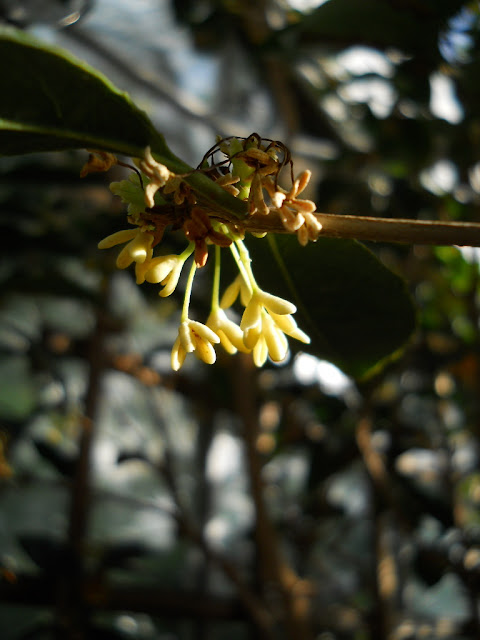 Osmanthus fragrans
When I was at Hidcote last March, there was an old Osmanthus tree in full bloom. Delicate yellow flowers filled the air with a sweet, lemony fragrance. I was unable to procure the name of the specimen at Hidcote, but I was told that Lawrence Johnston brought it back from one of his plant expeditions. Osmanthus fragrans is native to the Himalayas, where Johnston spent some time plant hunting. Similar, if not the same species, this flower's scent brought me back to another time and place. 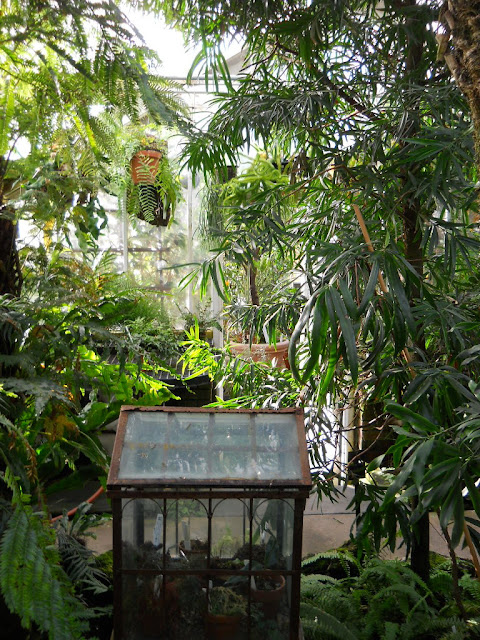 A view of a terrarium nestled in the fern house. 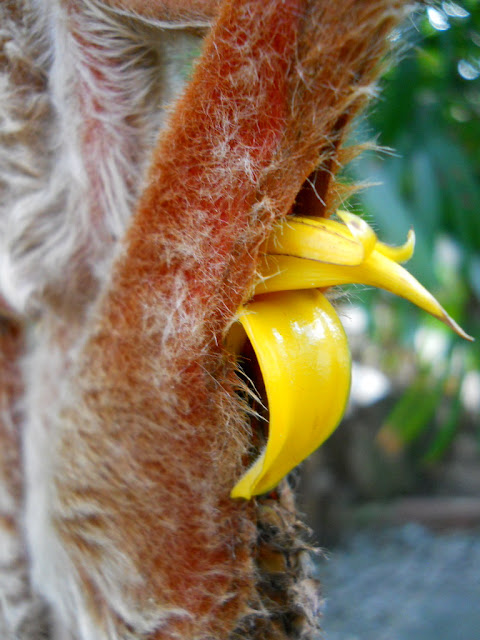 Heliconia vellerigera
This is a very unusual plant, its leaves are dark maroon and similar to a banana, it is very tall, and has a long, hanging fuzzy flower stalk. At Smith, this Heliconia was blooming for the first time in ten years. 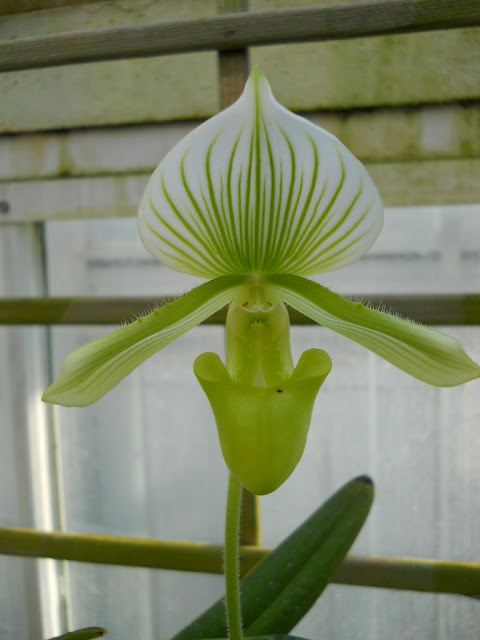 Nearly all the Paphiopedilum orchids were blooming and I thought this one was unusually striking. There was a tag telling us that the label was lost. 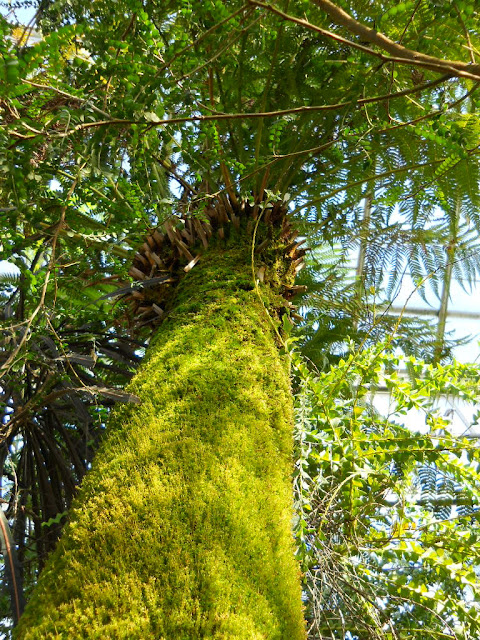 Dicksonia antarctica
Considered the largest and most hardy tree fern, tolerating temperatures to around 25 degrees. Clearly an old specimen with its massive moss covered trunk and towering height. 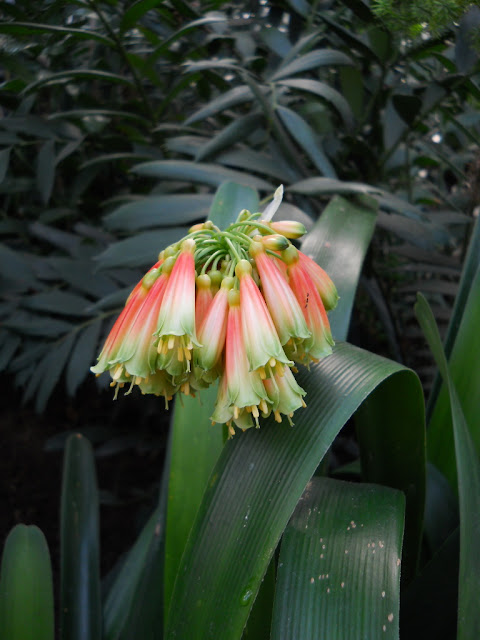 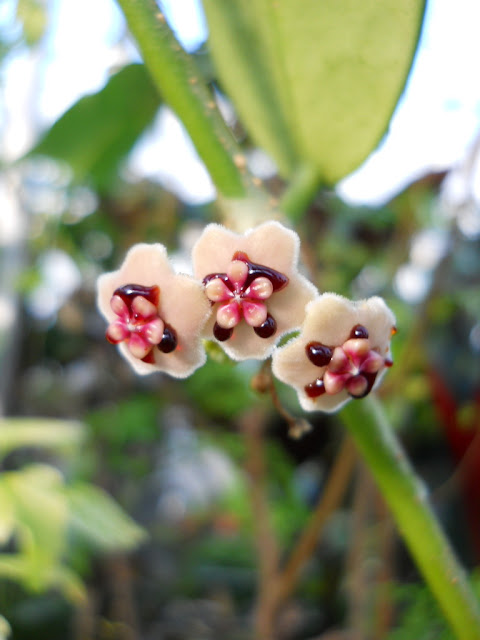 Hoya diptera
A fairly common houseplant, its flowers always amaze me.
Posted by Helen O'Donnell at 8:55 AM 1 comment:

The Green of Winter 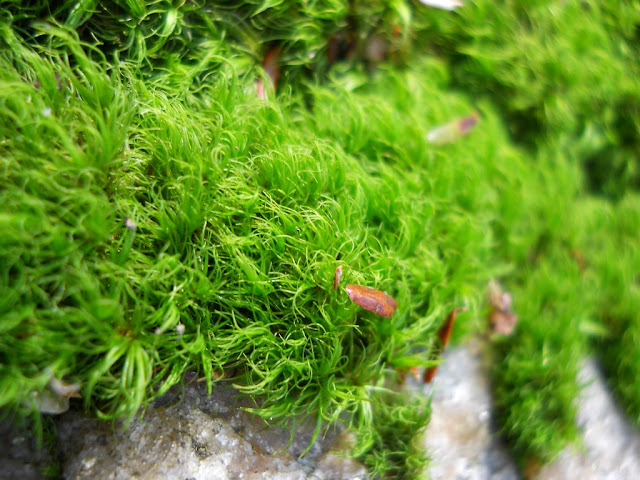 New Englanders are born and bred to complain about the weather. And so naturally a mild, snowless winter makes us fret. This is supposed to be a time that we retreat indoors, watch the snow fly, and while we might still think and dream about our gardens, we usually can't still see them. I know that I have made a grave internal miscalculation- I am no longer preparing for winter and I am now convincing myself that spring is in the air! Devastating times ahead! In the meantime, I am reading a wonderful book by William Cullina, Native Ferns Moss & Grasses. Here is an excerpt that made me smile and remember to love all weather.

"I often wonder if I was a moss in my former life. I have an affinity for the misty dampness of rainy weather- what the Irish call a soft day. It is just the kind of weather that brings the mosses back to life. These tiny plants do not have the deep roots and vasculature of larger (I will resist saying "higher") plants, so they must be content to wick up the rains and dews. When surface water is scarce, most mosses can dry up like a kitchen sponge left out in the sun, purging their cells of water and shriveling into a paler, shrunken version of their rain-soaked selves. When moisture returns they quickly become plump and verdant again. Thus, cool, rainy weather and lingering dews are just what mosses relish. Whether it is reincarnation or the possibility that I retain some genetic memory of my ancestral home in Ireland's foggy west, I do love a damp day, and I do love moss."
-William Cullina 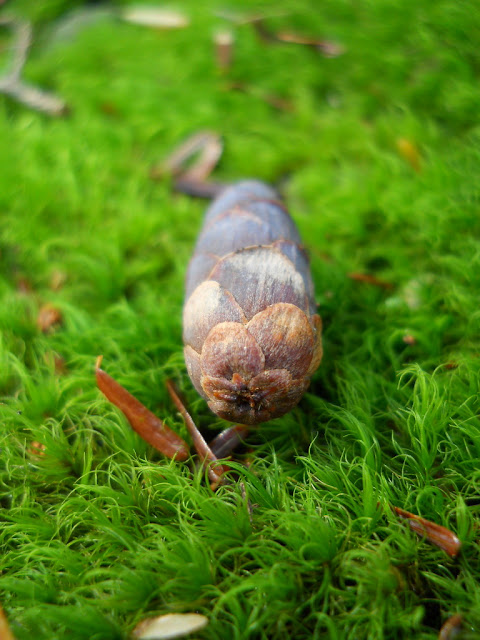 These photos were all taken in the woods where I live. The vibrant greens are reminiscent of wet winters in Washington state.  I believe the above moss is Dicranum scoparium, very abundant in New England woods and found on rock outcroppings. 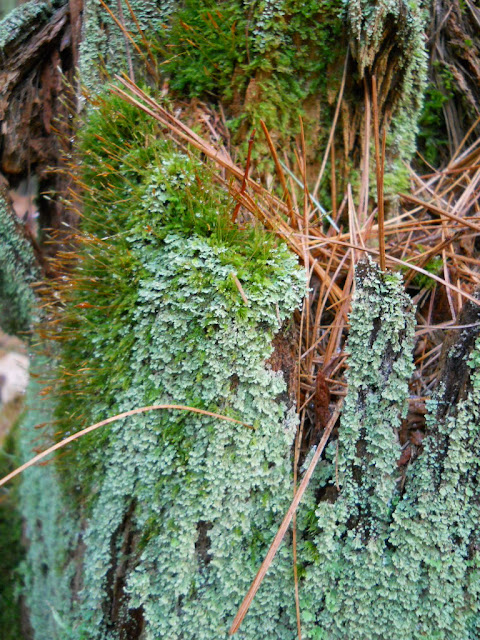 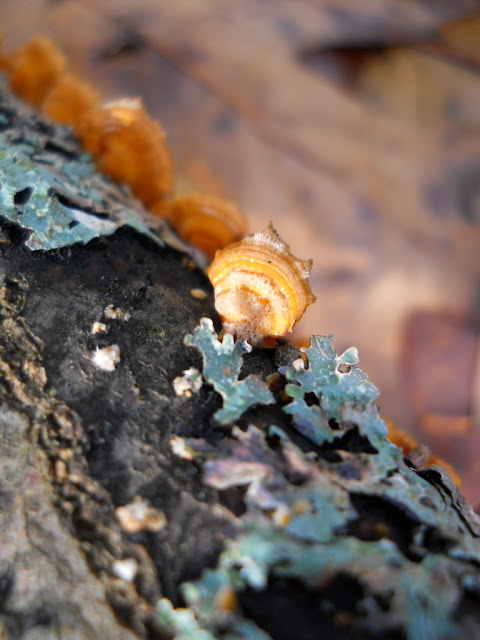 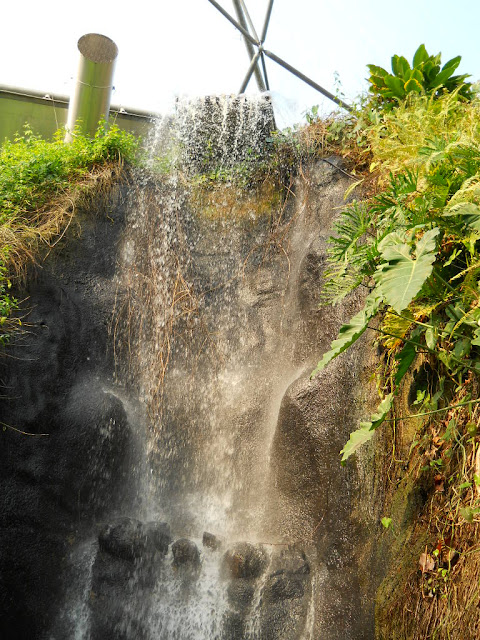 I went searching for a photograph of a specific plant and found myself wound up in the archives. I was newly captured by pictures I took eight months ago at The Eden Project biodomes and on this cold and bleary day I was pretty happy to be gazing upon one amazing plant after another. Here are a few gems from this glorious visit last March.

Above is a photograph of the waterfall cascading from the "top" of the walk inside the tropical plant biodome. The artificial tropics sound pretty good in January. 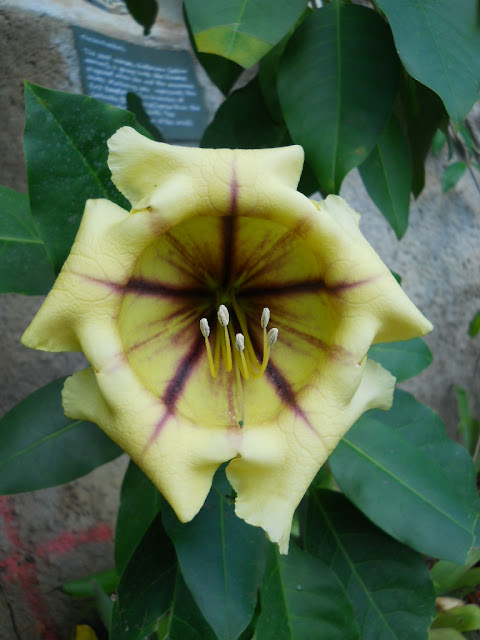 Solandra grandiflora
Incredible bloom! Described as a scandent (scrambling) shrub- a phrase I will make sure to use again. 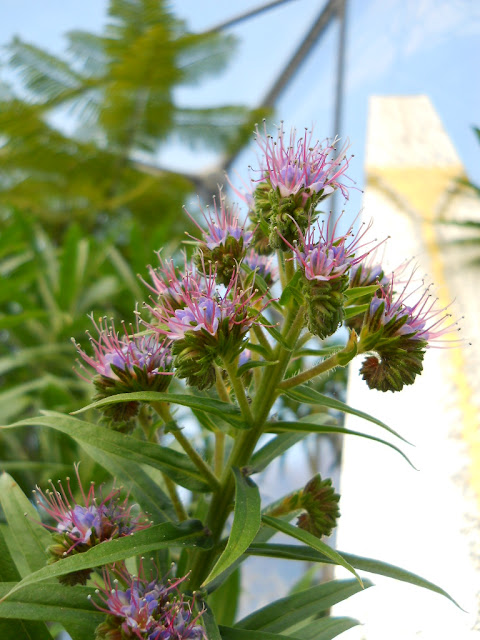 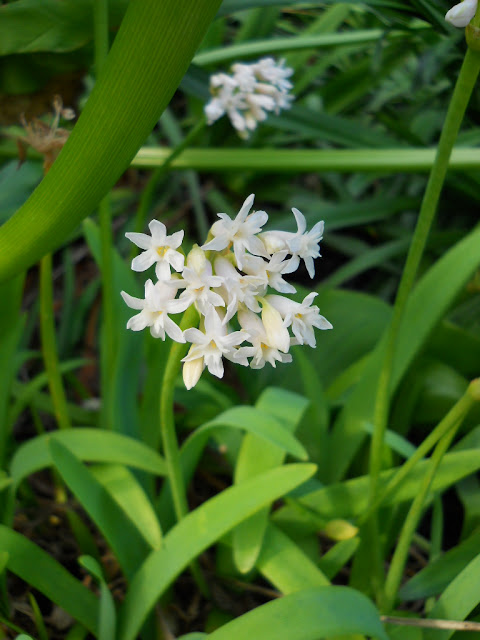 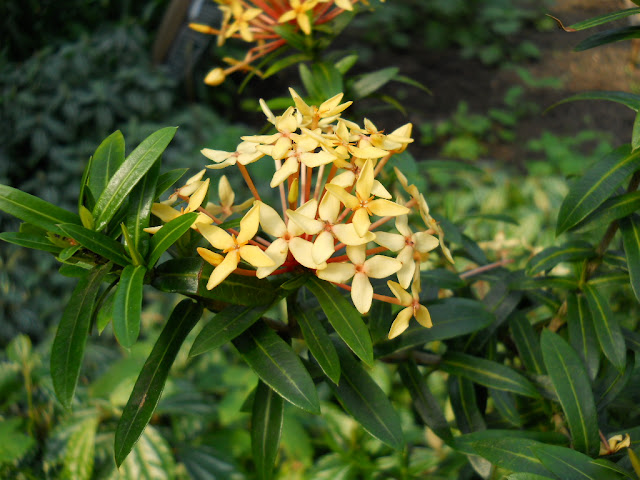 This marvelous plant had no name attached to it. For Christmas I received a great Encyclopedia of tropical plants and as I was casually flipping through its pages I came across the wonderful and vast genus of Ixora, which this flower resembles (though its leaves do not). This genus has over 500 species attached, so it is unlikely that I could pin this one down (if it is indeed Ixora). Any suggestions are always welcome. 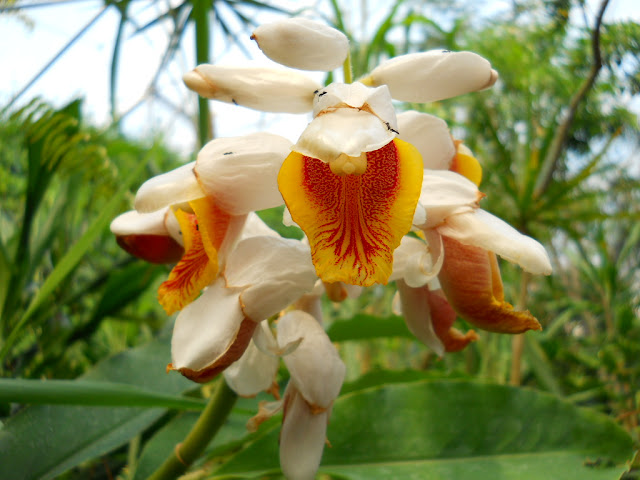 An incredible orchid and if you look closely you will see it is covered in small black ants. 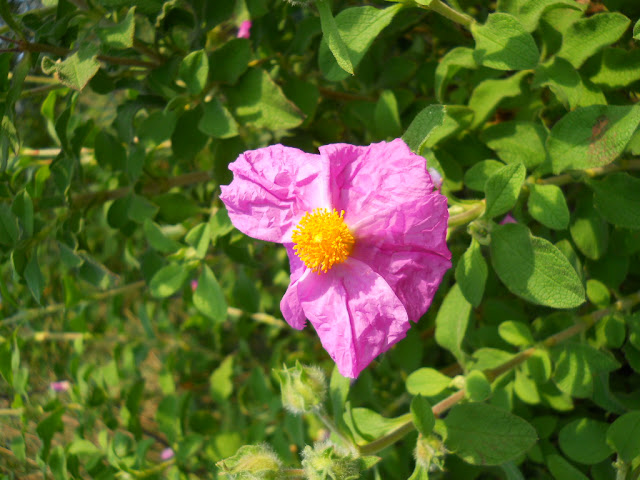 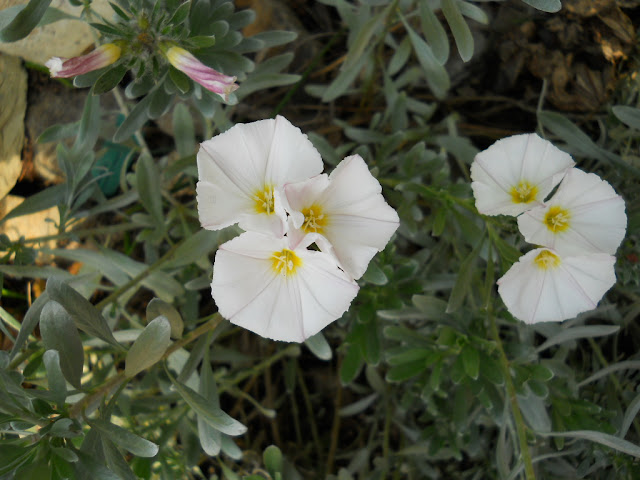 Hope you like the new look of the blog!

The Tropical Garden at Great Dixter 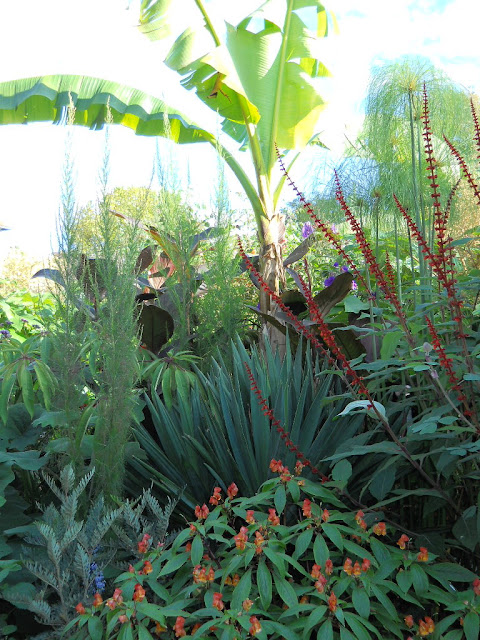